You are here: Home1 / LAZAR VOZAREVIĆ 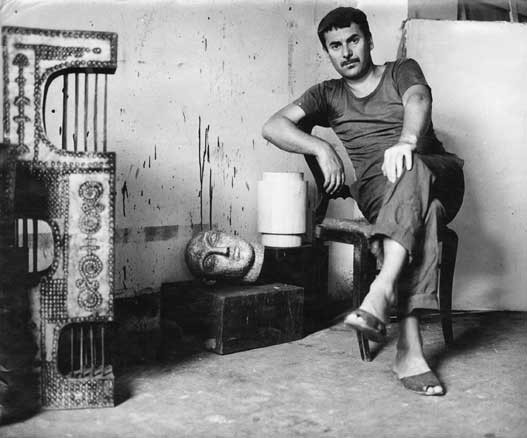 in the ZEPTER MUSEUM

Born in Sremska Mitrovica in 1925, died in Belgrade, in 1968. He graduated from the Academy (presently, Faculty) of Fine Arts in Belgrade in 1948, Department of Painting, with Professor Milo Milunović. He was adimitted to the same Academy as Docent for Painting and Drawing in 1961, but soon he died.

He was member of the following groups: Eleven Artists (Jedanaestorica) and The December Group (Decembarska grupa). 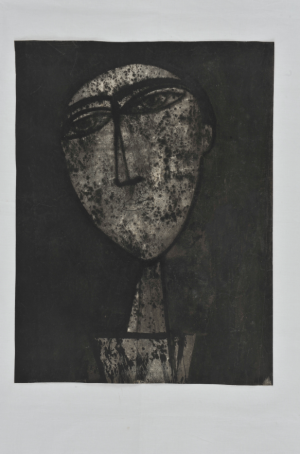 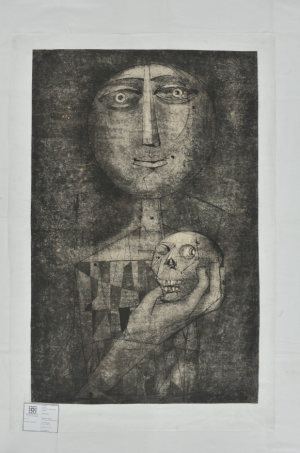 His works can be found in a number of private and public collections, locally and abroad. Realized mosaics: Belgrade – Hotel Metropol, Military Technical Institute, Youth Club.

Apart from painting, he was engaged in mosaic, drawing and illustration. 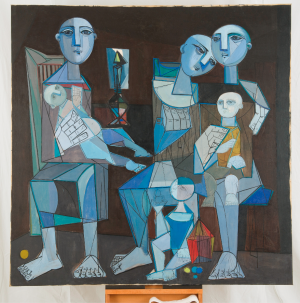 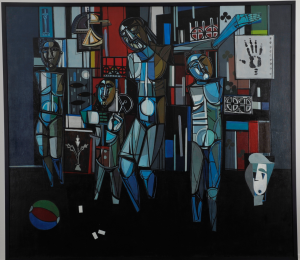 His friendship with To­ma­še­vi­ć and the stories of his field work he must have heard, particularly as he was inclined to believe that “painting is no fashion, but a reflection of a certain temporal and material destiny of a region, with adequate means of expression and the imprint of creative personalities”, La­zar Vo­za­re­vić stated in “his cubist approach to Byzantium” or “Byzantine Cubism” that: “Until now, Byzantium (the mediaeval Serbian fresco painting) in my works was a nostalgia for the past. Now, it is my future and my further development. I will never relinquish Byzantium because I would not be a painter afterwards”. In his interpretation of Byzantium as his own destiny and the imperative of “twentieth century visual alphabet” and in his endeavour to bind the national and the modern, Vo­za­re­vić spent a whole year (1960) experimenting with non-painterly materials, tried new technologies, used fire and acid in order to achieve what his interpreters call patina, burnt gold, smoke, soot, wax, everything that had been gathered on icons as traces of time and symbols of eternity”. Still, Vozarević used to say that he took over from frescos the architecture of the painting – the ho­ri­zon­ta­ls and the ver­ticals, the firmness of the drawing, the distribution of the masses, movement and the resonant chords of colours. 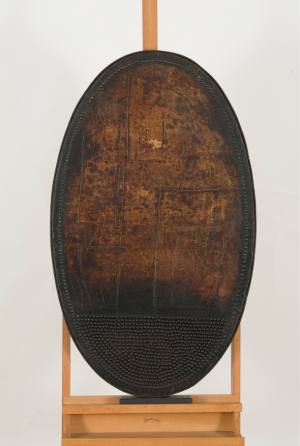 If in the 1960s the human figure plunged into the foundation and was lost somewhere behind the painting, if it was first covered by mist and that by a black-golden cloud creating a spilling patina on the surface, which had to be removed so that the form could be visible again, then several years before Vo­za­re­vi­ć’s death, the representation, in a changed aspect, was transformed into the form in front. First by nailing, then gluing, the metal hemispheres of different size, arranging them in regular geometric forms on agitated golden, black or red foundations, Vo­za­re­vić closed the circle of the “Byzantine Cubism”. The most perceptible parts of his Cubist-Byzantine figures (head, dreamy eyes) turned into a separate, visible sign (circle, ellipse) which then, seemingly without a meaning acquired a much deeper one. 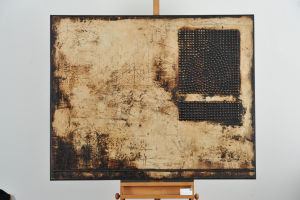 Lazar Vozarević, an artist of short life-span but with a rich artistic legacy, undoubtedly belongs to our painters who left a significant mark on the mid-twentieth century. A part of his opus, kept since 1973 in the place of his birth – Sremska Mitrovica, in the Gallery Lazar Vozarević – can now be seen in the ZEPTER MUSEUM. The collection contains paintings and drawings from all the three phases of Vozarević’s activity so that one can get an insight into the creative path and development of this artist. The fact that the permanent display of the ZEPTER MUSEUM comprises several of his works as well as works by other members of the December Group, to which he was affiliated, implies a specific generational contextualisation of this notable member of our modernism. 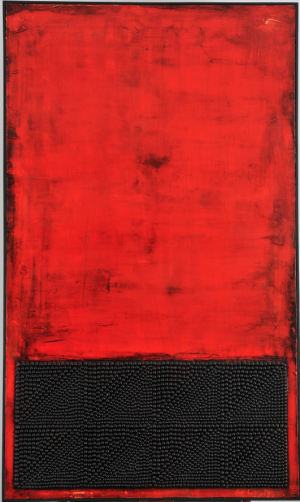 Art critics immediately noticed Vozarević’s works at exhibitions organised soon after he had finished his studies in 1948, so that his first solo show in 1953 was appraised as the most significant event on the local art scene since Lubarda’s foremost and revolutionary exhibition in 1951. His professor at the Academy in Belgrade, Milo Milunović, used to emphasise Vozarević’s forceful painterly temperament and a profound dedication to artistic activity. At Yugoslav exhibitions organised in European cities in the early 1950s art critics also noticed him as a young, prospective artist; however, they were reserved regarding his paintings having recognised in them traces of his fascination with Picasso. It could be said that the statement was a frequent platitude in analyses of the works of young European artists maturing in the post-war period in the shadow of that Spanish master. Because of his, often deep derogative influence on young artists who were not capable to tear away and continue on their own, Miodrag Protić called him pontifex maximus. The influence of the great artist on young Vozarević had primarily an appropriative character in the formative period of his poetics that finally engendered the figurative world which constituted the area of painter’s work for a whole decade. The „Byzantination of cubism“ or the „cubist Byzantium“ were phrases frequently used by art critics who defined the nature of the processes evolving in parallel in his painting at that time. The long-lasting desire of many artists to establish balance between the global and the local, implies in these operative terms the discourse of our artist in his attempt to reach that goal, and it seems he was able to do that. With full respect to our tradition, mediaeval frescoes, their expressiveness without a false pathos, Vozarević unfolded them into new compositional schemes where figurative representations were realised in a geometricized key, as constructs of the surfaces separated by powerful linear contours in a dark coloristic register. The anatomy of figures in these scenes, constituted by intersecting surfaces, evokes a cubist provenance allowing us to boldly surmise that those were influences of certain experiences from the artist’s youth. Namely, in all of his biographies Vozarević pointed out that in his childhood he used to assist his uncle in his tailor’s shop. We find this fact important because the drawing of tailor’s plans and patterns was a good practice to understand the transposition of two-dimensional into a suggestion of three-dimensional, the body itself. Therefore, we are inclined to conclude that with this particular artist the origins of constructing the painterly volume from surfaces were not rooted only in the recognition of the cubist procedure. Geometric fragments never became literal representatives of bodily parts of Vozarević’s figures but were frequently impressive with their strong contours and as carriers of the sheaves of lines, the musculature of the composition, its structure, statics and density. 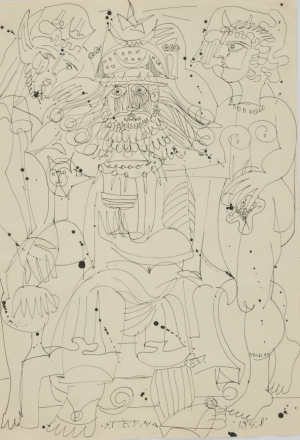 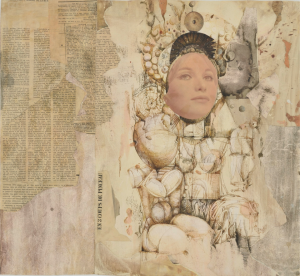 KRALJ I KRALJICA / KING AND QUEEN

Vozarević was a very complex personality and this can be read from his works. While in the paintings from his first phase, which we have already mentioned, the lines, strong, robust, of emphasised graphic quality, works on paper, although similar to paintings in their narrative (iconographic repertoire – from mythological to sacred) were executed with precise and trained lines, lyric in their character. Accepted as an exceptional draughtsman (and a painter, of course) he surprised everyone when he deconstructed the picture to the state of informel. In one of his statements he commented that he only moved from fresco to icon. He believed that any of Rembrandt’s painted parts, when enlarged, contained an informel painting in every fragment. In that way he neutralised all the interpreters who could vulgarise his informel painting as a mimesis of an icon blackened with the burning candles. That phase represented for him a research into the emanation of light from darkness, emanation of colour from black. With different layers of paint, to the state of a relief, and with applications of non-painterly material he created informel paintings; however, some of them still showed fragments of figurative compositions. Vozarević was rational and assured of his métier and therefore he boldly plunged into analyses all the way to destruction, with his supreme knowledge and feeling for synthesis and reanimation of his own painting. 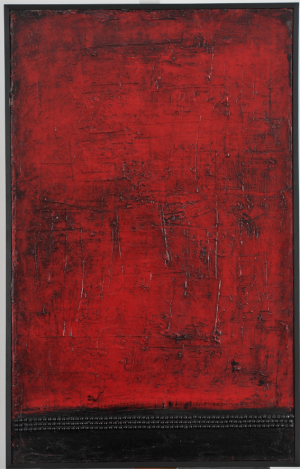 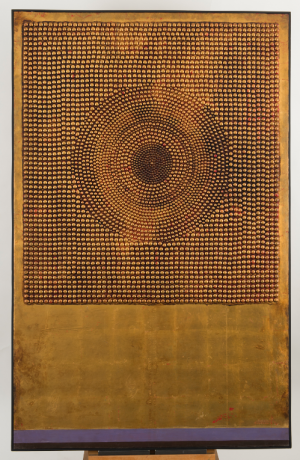 The artist entered the third phase of his creative activity by producing works as precursors of what we would later recognise as optical art. The line was shattered into dots, organised into definite geometric forms, particularly circles and rectangles. The dots were upholsterer’s decorative nails with rounded and coloured tops on a painted and almost always golden background. That central, elevated motif of nuanced golden colour emanated light; when circular it resembled a sun-like disk of warm radiation. Critics used to remark that the artist had neglected the syntax of the linear he was sovereignly in command of. To this Vozarević used to reply that he only dissected the line into dots, its constitutive elements. Sometimes he “pulled out” such a central motif from the painted surroundings and endowed it with the status of an object.

On the basis of Vozarević’s experiments and research, his liveliness and creative restlessness, his anticipatory spirit and the significant legacy and achievements we can only suppose how much we have lost by his early departure. What we can do is to analyse further what he had left to us to keep and find new dimensions of the artistic opus of Lazar Vozarević and his contribution to our culture. 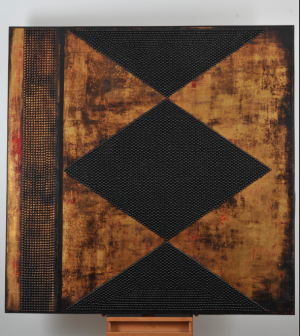